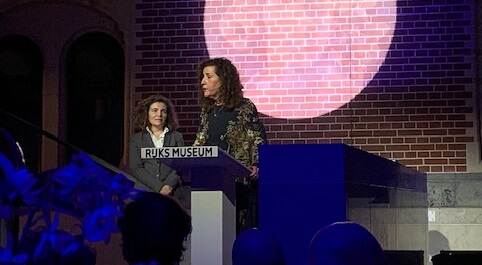 The Netherlands and Italy.

The North and the South.

I could go on and on like that, highlighting the differences between our 2 countries. Because there are plenty of differences, and talking about the things that divide us is always an easy way to hold the attention of a crowd. But doing so would be to ignore everything that we have in common, which is much more important, and – I believe – a much more accurate reflection of reality.

Just look at the division between the North and the South in the Netherlands itself. Here, the North has traditionally been Calvinist, while the South is mostly Catholic. This goes beyond how people practice their religion. More than anything, it’s a matter of culture and mentality.

And let me tell you, as someone who grew up in the South – I feel much more at home in a Catholic church in Rome than I do in a Calvinist church in the Protestant part of this country.

In international trade and politics, the Dutch like to talk about themselves as part of an Atlantic alliance, shoulder to shoulder with our British friends across the North Sea. But let’s not forget – especially in light of recent events – who laid the foundations of the European Union: Italy and the Netherlands, together with Belgium, Luxembourg, Germany and France.

For more than half a century, our 2 nations have worked together closely in Europe, as old friends. Others came much later, and left early...

We – the Netherlands and Italy – haven gotten to know each other much more intimately over the past decades. And we’ve learned to appreciate each other, in so many ways.

Now, we’ve come together here to open this exhibition: a crowning achievement in the art-historical partnership between our 2 countries. Never before have so many works by Caravaggio and Bernini, and by other masters from the Baroque period, been brought together on Dutch soil. A remarkable undertaking, and I am truly pleased with the result.

Caravaggio and Bernini were rock stars long before rock ‘n’ roll even existed. Ba-rock stars, if you will. They were rebels who went against tradition and convention and who set new standards in art. They rejected the sharp distinction between painters and sculptors and began working  together, forging interdisciplinary partnerships, exploring their own limits and learning from each other. Just like we do today, in Europe.

I hope that this exhibition will draw the crowds it deserves. Because it is a testament to what can be achieved together, and – most of all – to the heights reached by Baroque artists in Italy, and the timeless work they created. Cherished by Rome, Italy, and now the Netherlands.