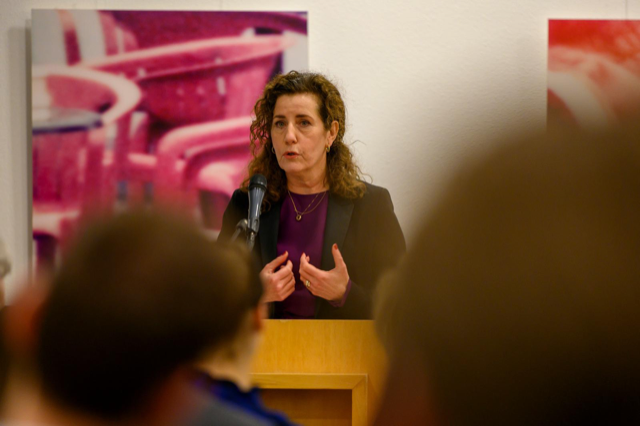 Thank you all very much for being here today. Here at this meeting, in The Hague, in the Netherlands. Welcome!

It’s great to see you all here, because that means you came here. That you chose to leave your comfort zone and your familiar surroundings. That you took a leap into the unknown.

I hope that you are making new connections here

Perhaps just like Charles Darwin benefited his whole life from his voyage on the Beagle, between 1831 and 1836. Unlike you, Darwin was a university drop-out. To do something useful with his life, he joined the crew of a sailing vessel, the Beagle, for a journey around the world. The natural phenomena he saw along the way gave him enough to think about for the rest of his life.

Ancient turtles, land masses pushed up after an earthquake, closely related finch species with differently shaped beaks – it all fascinated him immensely, and it inspired a whole new vision on life. A vision that led to a series of unprecedented scientific breakthroughs, which in turn gave birth to an -ism: Darwinism.

But he didn’t do it all on his own. In order to derive general statements from the observations he had made on his journey, he first had to verify what he had seen. He was able to do part of that work himself, by conducting experiments at home. But for the most part, he relied on his global network of correspondents. During his lifetime, Charles Darwin exchanged more than 15,000 letters with about 2,000 correspondents around the world.

Every year, he spent enormous sums of money at his local bookshop on stationery, envelopes and stamps. In 1877, his total bill amounted to 53 pounds – about the same as his butler’s entire salary for that year.

Luckily, Darwin lived in a great time for letter writers: with the rapid rise of railways, letter correspondence skyrocketed. A parade of postmen stopped by Darwin’s house every day; some days, there were more than 10 deliveries. It was mass communication before that concept even existed, and Darwin took full advantage of it.

Of those 15,000 letters Darwin sent and received, one more than any other ended up changing the course of his life – and of history. It was a letter from Indonesia that arrived in 1859.

Darwin didn’t do it all on his own

For decades, Darwin had been working on a theory – a theory that proposed that new species could develop over time. A revolutionary notion, in Darwin’s days. After all, the consensus at the time was that God had created all species, and that they had remained the same ever since. And Charles Darwin wasn’t the type of man to stir up trouble. Preferring caution, he kept reworking his theory, to delay publication, and the outrage it might cause.

Until that one letter arrived...

A letter from Alfred Russel Wallace, a scientist doing field research somewhere deep in the jungles of Indonesia, who had come up with a theory on... the development of new species. When Darwin read the letter and saw the parallels between Wallace’s research and his own life’s work, he put aside his reservations and decided to publish his theory. On the Origin of Species was published that same year – a work that would catapult Darwin to scientific superstardom, and that would turn his name into an -ism.

Charles Darwin’s story shows that someone with an open mind – and a long list of international contacts – can achieve great things. If it weren’t for Darwin’s global network, I probably wouldn’t be talking about him right now. He would have remained an obscure naturalist, and evolutionary theory would not have been known as Darwinism.

I see a parallel between Darwin’s life and your decision to come to the Netherlands, and I hope you see it too: much like the issues that occupied Darwin, the problems we face today demand international solutions. Climate change, the energy transition, mass migration, the constant threat to our international security – the list goes on. These problems are too big for any one country to solve on its own. We can’t hide behind our dykes forever, safe in our ivory tower.

These are complex issues that require cross-border cooperation. Problems that can only be solved by approaching them from different perspectives. By organizing away the blind spots. And that requires diversity. Cultural diversity, diversity of thought, and diversity of approach.

The Netherlands is not a global superpower. We’re somewhere between the biggest small country and the smallest big country. Still, we depend on other countries in so many ways. We’re a knowledge economy, and knowledge knows no borders.

No wonder then, that the Netherlands is so open to outside influences. We welcome diversity in all its forms, because we know what it has brought us: a healthy, prosperous society that’s open to the outside world – that’s open to you!

But I’ll be honest with you: the reason for our openness is not purely idealistic. Part of it is sheer self-interest. We need you. Your knowledge, Your cultural background, and down the line, after you’ve graduated and found a job, your tax payments.

But it’s not a 1-way street; you’re getting something in return. An affordable, high-quality education, the experience of studying and working together with people from different cultures, and an internationally recognized diploma. And by studying here, you’ll be better prepared to meet the demands of the increasingly globalized job market.

So it’s really a win-win situation.

We need you. Your knowledge. Your cultural background

Finally, I also have 2 personal tips for you, which will sweeten the deal even more, for both parties:

Tip number 1: learn Dutch! Learning a new language is fun – it opens doors, and even though you might not be planning to stay here after you graduate, there’s no telling what will happen in the next several years. Maybe you’ll meet your future partner here, or maybe you’ll get a job offer that’s simply too good to turn down. About one in four international students still live here 5 years after they’ve graduated. So there’s a pretty good chance that you will be one those people. And if you are, some basic Dutch skills might just come in handy.

My second tip is really more of a favour I want to ask you: share your positive experiences with the Dutch students you meet. Because I want more of them to follow your example and go abroad for their studies. The Dutch love to travel, but when it comes to our education, we mostly stay at home. On the 1 hand, that says a lot about the quality of Dutch higher education. But on the other hand, it’s a missed opportunity. Because a lot of Dutch students are denying themselves everything you’re experiencing here. So I would be very grateful if you would inspire your Dutch peers to take the same leap you’ve all taken.

Share your positive experiences with the Dutch students you meet

Let me leave you with this: The Netherlands is not just a country where people from all over the world come to study... It is also a country where criminals from all over world are brought to justice. The city of The Hague is the seat of the International Court of Justice, the Permanent Court of Arbitration and the International Criminal Court. Slobodan Milosevic and Radovan Karadzic had to answer for their war crimes here, at the Yugoslavia Tribunal, just a stone’s throw away from the Eurojust headquarters.

In other words: The Hague has earned its status as the city of Peace and Justice.
But true peace and justice can only be achieved:

Because that’s how we tackle the issues we face today. So you made the right choice in coming to the Netherlands. If you want to help solve today’s most pressing issues – such as climate change, the energy transition, mass migration and the constant threat to our international security – having studied abroad gives you a tremendous advantage. Because studying abroad teaches you to focus on what you have in common with others, instead of on what makes you different. And it also shows that you’re willing to get to know others, and to look and think beyond borders.

But more important than any of that: it’s so much fun! You’re taking on a new adventure, discovering a new country and meeting people from all kinds of backgrounds. Studying abroad shapes you as an individual: you broaden your horizons and learn to empathize with others. I firmly believe that the world would be a better place if more young people were to follow in your footsteps and study abroad. Because it fosters mutual understanding.

So by studying here, you are doing your part to create a better world.

Thank you very much.